My thanks go out to Tasty Book Tours for letting me participate in this tour event and to Avon Books for providing me a copy of the book in exchange for an honest review. If you’d like to see all of the blogs who were involved in this event and read some exclusive content, please click on the banner above. =^.^= 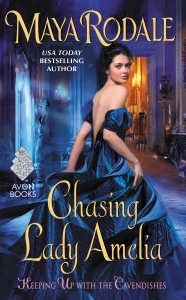 Series: Keeping Up with the Cavendishes #2

In the second novel of Maya Rodale’s enchanting Keeping Up with the Cavendishes series, an American heiress finds her reputation—and heart—in danger when she travels to London and meets a wickedly tempting rake.

Lady Amelia is fed up with being a proper lady and wishes to explore London, so one night she escapes . . . and finds herself in the company of one Alistair Finlay-Jones. He’s been ordered by his uncle to wed one of the American girls. How lucky, then, that one of them stumbles right into his arms!

Alistair and Amelia have one perfect day to explore London, from Astley’s Amphitheater to Vauxhall Gardens. Inevitably they end up falling in love and making love. If anyone finds out, she will be ruined, but he will win everything he’s ever wanted.

When Amelia finds out Alistair has been ordered to marry her, he must woo her and win back the angry American girl. But with the threat of scandals, plural, looming . . . will he ever catch up to the woman he loves?

This was a delightful read though there were times where I found myself getting frustrated with the characters and I had a bit of a problem with the timeline of some of the events in the book. I shall admit that I had a bit of a high expectation with this story because I loved the first book in the series immensely, so I am a bit sad that I can’t give this book a full five paws. But this isn’t to say that it is not an enjoyable read or that I wouldn’t recommend that fans of Rodale’s novels or historical romance give this a read. In fact I would encourage you to read it, especially if you’ve read the first book in the series!

So let me start this review off by saying that Amelia’s book takes place during and a bit after events in Lady Bridget’s Diary. By this I mean, in Lady Bridget’s Diary the reader is told that Amelia disappears for an entire day, but no explanation is given to where she was and what she did during her time away from Durham House. This book details Amelia’s adventures during that day as well as covers other events that happen to Amelia during her time in London. As such, I would suggest that newcomers to the Cavendish series start with the first book. Though you could read this one first since the primary focus is on Amelia, be prepared for some minor spoilers from the first book if you do.

Out of all of the Canvendish siblings, Amelia was the only one who I had problems connecting with in the first book, so while I was looking forward to continuing the series because I loved Bridget’s story so much, I went into this one with some expectations while also prepared to possibly grit my teeth where Amelia was concerned. It isn’t that I don’t like Amelia, it’s more that I found her attitude and behavior to be exhausting after a while. I like that she refuses to conform to London society standards, that she’s not afraid to be outspoken or eschew proper behavior. Her rebellious nature is tempting on many levels, but it can also be tiresome and gets old really fast. As a result, I had a bit of a love/hate relationship with her in this book. On the one paw I wanted her to be able to live her life the way she wanted, but on the other I wanted her to grow up and see things from her siblings points of view. In the end I really wanted her to find a balance between being the wild girl that she is at heart and being a well-mannered young woman in London society.

Alister also had a tendency to drive me crazy at times. While I understand that he feels responsible for what happened in his past and as such is driven to make amends, I wanted to grab him by the shoulders and give him a good shake while telling him to man up where his uncle was concerned. There’s doing something because it is what you want to do and then there is doing something because you feel like you have to in order to please someone else, and in the case of Alister, his actions were based primarily on the latter rather than the former. Despite this, Alister is a likeable character. He’s got a mischievous side which compliments Amelia’s and he knows how to be responsible, even if it is to a fault sometimes. He’s just enough of a wild card to guarantee that life wouldn’t be dull between him and Amelia while also being a stable influence for them both. He strikes me as one who would let Amelia do what she pleases provided it doesn’t bring harm to her or anyone else and isn’t too crazy.

I really liked how Rodale tied this book in with the previous novel in the series. The set up was perfect and it was great to find out what it was that Amelia had gotten up to when she disappeared from the house that day. It was also enjoyable to see previous events and scenes from Lady Bridget’s Diary through Amelia’s eyes. I ended up having a greater appreciation for the Cavendish siblings and all that they went through in that book after reading this one, and I am now curious to seeing how Rodale is going to tie in Claire’s story with these novels.

Now as I mentioned, this book runs parallel with Lady’s Bridget’s Diary.  However, while I liked that there was this connection between the two books, I found myself getting confused as to the passage of time within this particular novel toward the end. There is a realization that happens to Amelia later in the story and the passage of time between when the book starts and when this realization happens doesn’t quite work from what I understand of this particular issue. Much of the book details the day that Amelia was missing, I’d say a good half of the novel covered this. That’s all well and good, but the passage of time for the remainder of the book felt like only a few days had gone by before this particular issue happens, and from what I understand of this it takes a few weeks rather than a few days to happen. Course, I could be wrong, and it’s no fur off my nose if I am, however, it did seem like there was some uncertainty in the timeline while I was reading the book. Rodale, if you happen to read this, I’d love to hear your perspective on this.

Overall this was a wonderful addition to a series that I am growing to love more and more with each installation. I am greatly looking forward to Claire’s book which releases in December, and I truly hope that Rodale allows James to have a book as well, or at the very least a chance to share his story with fans in some format. That’s one thing I missed with this story: we didn’t really get much of James this time around and I just know that there is a story where he is concerned just waiting to be shared. Please, Rodale, promise that you’ll tell James’s story at some point! If not in Claire’s book then in a novella or a full book of his own, murr! 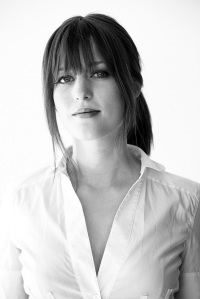 Maya Rodale began reading romance novels in college at her mother’s insistence and it wasn’t long before she was writing her own. Maya is now the author of multiple Regency historical romances. She lives in New York City with her darling dog and a rogue of her own.

If you’d like a chance to win 1 (one) of 3 (three) print copies of Lady Bridget’s Diary, please click on the Rafflecopter link below: