Sara’s Review: Once a Soldier by Mary Jo Putney

I’m excited to be part of the tour for Mary Jo Putney’s newest novel. My thanks to Tasty Book Tours for allowing me to participate in this event and to Zebra – Kensington Books for providing me with a review copy in exchange for an honest review. If you’d like to see all of the blogs involved in this tour, please click on the banner above! =^.^= 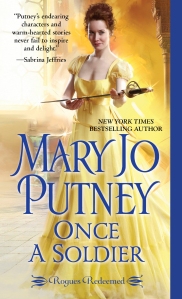 As heir to a title and great wealth, Will Masterson should have stayed home and tended his responsibilities. Instead he went to war. Now, after perilous years fighting the French, he intends his current mission to be his last. But all his plans are forgotten when he arrives in the small mountain stronghold of San Gabriel and meets her.

Knowing herself to be too tall, strong, and unconventional to appeal to a man, Athena Markham has always gloried in her independence. But for the first time in her life, she finds a man who might be her match.

Two of a kind, too brave for their own good, Athena and Will vow to do whatever it takes to vanquish San Gabriel’s enemies. For neither will back down from death, and only together can they find happiness and a love deeper than any they’d dared imagine…

For my first foray into Putney’s writing, I’m going to admit that I may have picked the wrong book to start with because while I really wanted to like this book, and while there were some aspects that I enjoyed, the majority of the story was just an okay read for me. That being said, I’m definitely going to read more of Putney’s titles and continue with this series in particular because I’m curious to see what happens to the other rogues I met at the start of the book, and I truly do think that Putney is a great writer when all is said and done. While this may not have been the book for me, I definitely think that fans of Putney’s novels will enjoy this story and I encourage fans of historical romance to give this book a try.

As I’ve said, this was an okay read for me. I didn’t completely love it, but I didn’t entirely hate it, either. While I liked Athena and Will, they didn’t strike me as exceptionally memorable characters when all is said and done. I couldn’t really connect with either of them and I felt as though their relationship was rushed. It would have worked for me had there been an attraction with a slow buildup that lead to a steamy climax, but Will instantly set out to make Athena his regardless of whether she was interested in him or not. This left a bit of a sour taste in my mouth, and it turned me off to their relationship rather quickly. Plus, I just couldn’t see them having the kind of relationship that would have resulted in a happy marriage in the end. Having said that, the relationship between Sofia and Justin was perfect. I had a lot more respect for their relationship than I did for Will and Athena’s. Theirs was an almost impossible love, it was sweet in their realization that they were attracted to each other and flirted when they could, and I really wanted them to find a way to end up together. I only wish that I had just as much interest in Will and Athena’s relationship, but it just wasn’t there. I could respect Athena’s strength and fierce devotion to the people of San Gabriel, and I admired Will’s military prowess, but I think Putney could have done so much more with these two.

And having said that, the other problem I had with the book was how much of the story focused around saving San Gabriel rather than the characters themselves. The amount of focus on military strategy, politics, and the like was not what I would have expected to find in a romance novel, even a historical romance novel. It shifted so much of the focus away from the development of the characters that is actually added to their lack of memorability and caused the story to drag periodically. It’s not that I didn’t care about the kingdom and its people, but I really would have preferred more focus on Will and Athena’s relationship thus allowing for more of a connection with them and belief that they were genuinely falling in love with each other rather than the sudden lust and rush into a relationship which I felt they experienced.

Now, I don’t want anyone to think that I didn’t enjoy some parts of this book. As I said, I loved Sofia and Justin’s relationship. I also loved Sofia herself throughout the book and found her to be a sweet, mischievous young woman. Her meddling at the end which resulted in Athena confessing her feelings for Will actually made me laugh, and I loved how she quickly stepped up to take her place as queen even though she had never thought that she would one day take the throne. She was a fun character that I would have loved to have seen a separate book for. I also rather liked learning about the history of San Gabriel and found the world that Putney built to be a strong one. I loved her blending of reality and fiction. I could believe that San Gabriel was a real place and the myth that Putney pulled from regarding the creation of San Gabriel was fascinating, I just would have preferred less focus on the military side of things when all is said and done, though I enjoyed the scenes where the kingdom came together to celebrate the repairs made to the land around them and the return of their men from the war. No matter how dire their situation was, the people of San Gabriel were certainly strong and quick to look at the positive side of things rather than the negative.

So all right, I realize that this review makes it sound like I actually didn’t like the book, but I really did find it to be an okay read. There was enough in the story to make me want to keep going and see what would happen with everyone, and I’m happy I kept with it because I ended up liking the book and the characters toward the end. There was also enough here to make me want to continue with the series, and I really do plan on reading some of Putney’s other books in the near future. I think this book would appeal to a great many readers and I definitely would recommend that folks give it a try for themselves and make their own judgements on it. I always say that what doesn’t work for one reader may be exactly what another reader is looking for. So give this book a try and let me know what you think of it in the comments below when you’re done. I’m willing to bet that most of you will end up enjoying it when all is said and done. 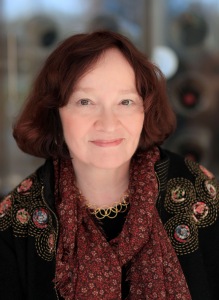 Mary Jo Putney is a New York Times and USA Today bestselling author who has written over 60 novels and novellas. A ten-time finalist for the Romance Writers of America RITA, she has won the honor twice and is on the RWA Honor Roll for bestselling authors. In 2013 she was awarded the RWA Nora Roberts Lifetime Achievement Award. Though most of her books have been historical romance, she has also published contemporary romances, historical fantasy, and young adult paranormal historicals. She lives in Maryland with her nearest and dearest, both two and four footed.

To win 1 (One) of 3 (Three) print copies of Once a Solider, please click on the Rafflecopter link below: