Release Day Blitz: Playing for Her Heart by Megan Erickson

We’d like to thank Tasty Book Tours for letting us participate in today’s celebration release for Megan’s newest title! To see all of the blogs involved in the release day celebration, please click on the banner above. =^.^= 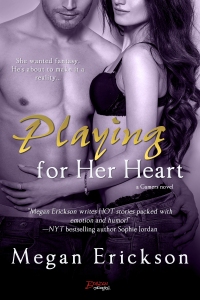 Grant Osprey just had the hottest sex of his life. Sure, they were both in costume, and yes, it was anonymous, but he never expected her to bolt in the middle of the night without so much as a good bye, let alone exchanging numbers. Or names. All he’s left with are her panties and some seriously X-rated memories…until he meets his business partner’s little sister.

Only Chloe Talley isn’t the bold, sexy vixen he remembers. And she wants nothing to do with him.

Cosplay is Chloe’s only chance to leave her boring, socially awkward world behind. To forget that she’s failing at life and can’t be with anyone, let alone a single-father like Grant. But the raw hunger between them is undeniable. With him, she can be a misbehaving maid. A sexy call girl for hire. Each scene pushes Chloe beyond her strict boundaries, until Grant demands the one character she can’t play.

Chloe craned her neck and moved to go around the man, but the he sidestepped, right into her path. She glared at him. Or rather, she glared at…Doc Ock.

A Doc Ock who was leering at her.

He twisted at the waist, so his metal octopus arms clanged together. Leaning into her, he pulled a string near his head so a claw snapped in her face. “Need a hand untying that corset, baby?” He held out his hands so that all four of his metal arms lifted. “Because I got six.”

This was what was keeping her from Breck? A Spider-Man villain? She raised her eyebrows, emboldened by her costume so she could say what she never could without it.

“Seriously? That’s your come on?”

“That’s the best you could come up with?”

His lips twisted to the side. “Well, uh, how about, are you afraid of spiders? Because I can protect you.”

She rolled her eyes. “Spiderman already beat you once and—”

And then her world tilted as someone gripped her waist and slung her over a hard shoulder. Then she was moving as the body who held her began walking. She protested with an umph and raised her head, watching Doc Ock stare after them with wide eyes, his metal arms clanking.

Chloe tried to get her wits together, remembering this was cosplay and she was Sari and how dare this guy pick her up? She turned her attention to her kidnapper. Or rather, his back. His blue-shirt-clad back. “Hey, put me down.”

He did with a thunk, and once she righted her skirt and brushed her hair out of her face, she got a good look at Breck. Her Breck.

She placed her hand on her hips and tried to keep the breathiness out of her voice, because damn. “I was doing just fine back there.”

“I know you were,” he said in a deep voice that skittered down her spine like fingers. “But I wasn’t. Had enough of watching that guy trying to hit on you.” Those full lips, so full they were almost feminine, twisted into a smile. “I wanted your attention. Because you’re the best Sari I’ve seen today.”

Chloe sucked in a breath. Oh yes, he’d do. 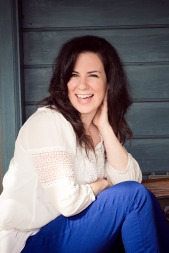 Megan worked as a journalist covering real-life dramas before she decided she liked writing her own endings better and switched to fiction.

She lives in Pennsylvania with her husband, two kids and two cats. When she’s not tapping away on her laptop, she’s probably listening to the characters in her head who won’t stop talking.

If you’d like to enter to win a signed print copy of Playing for Her Heart (Gamers #1), please click on the Rafflecopter below. Open to US residents only.

Posted on August 11, 2015, in Publishing News. Bookmark the permalink. Comments Off on Release Day Blitz: Playing for Her Heart by Megan Erickson.