Willow’s Review of Dark Light of Day by Jill Archer 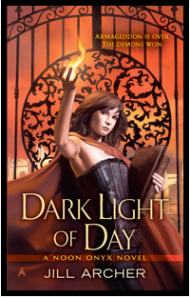 Armageddon is over. The demons won. And yet somehow…the world has continued. Survivors worship patron demons under a draconian system of tributes and rules. These laws keep the demons from warring among themselves, and the world from slipping back into chaos.

Noon Onyx grew up on the banks of the river Lethe, the daughter of a prominent politician, and a descendant of Lucifer’s warlords. Noon has a secret: She was born with waning magic, the dark, destructive, fiery power that is used to control demons and maintain the delicate peace among them. But a woman with waning magic is unheard of, and some would consider her an abomination.

Noon is summoned to attend St. Lucifer’s, a school of demon law. She must decide whether to declare her powers there…or to attempt to continue hiding them, knowing the price for doing so may be death. And once she meets the forbiddingly powerful Ari Carmine—who suspects Noon is harboring magic as deadly as his own—Noon realizes there may be more at stake than just her life.

I’m not sure why I waited so long to read this book because it truly was a pleasure to read. Right from the start I was pulled into the story, and several times I found myself wanting to continue reading even though I knew I had to stop for the day. I could very easily have read this in one sitting.

I loved Noon. She’s feisty, conflicted, rather sarcastic at times, caring (sometimes to a fault), and determined (though not always for the right reasons). The fact that she is born to be a Maegester, but wants to be a Mederi, was something I could understand, but that still didn’t stop me from wanting to scream at her a few times throughout the book. Her dislike of actually undertaking that which is required of her position, namely the handling of judgment and possible punishment of demons, got a tad aggravating. And yet I still was rooting for her when all was said and done, especially when her combat training began. She’s a hard character not to like. Another character I loved was Ari Carmine. Oh where do I begin with this guy? Can I simply say that if he didn’t belong to Noon, I’d seriously make him mine? ~purrs~ He’s simply wonderful. A bit over protective, but he’s fun, dedicated, and he makes my whiskers curl in delight. Okay, yeah, he can be a bit of a jerk at times, but to be honest who isn’t? I mean no one is ever perfect. Together these two characters are perfect for each other. Then there’s Peter, Noon’s childhood friend. He rubbed my fur the wrong way. There are so many reasons why I disliked him, but if I told you those reasons, I’d be giving away spoilers, and you all should know by now how we felines feel about spoilers. I will say this much, the guy is way too possessive for my taste! He’s also like a dog with a bone when it comes to Noon and her final choice on what to do with her life. By the end of the book I was spitting mad at him, and for good reason. The rest of the characters were also enjoyable and Archer has done a great job making everyone unique, entertaining, and vital to the story. No one is thrown in simply to fill space.

As far as the story itself goes, like I said, it hooked me from page one and wouldn’t let me go until I had finished. The idea of demons winning Armageddon, of angels and Lucifer’s warlords working together, and just the blending of familiar spiritual concepts, patron demons (think deities) with fantasy made for what I felt was a unique read. There were a number of times where I would read about a Patron Demon and find myself thinking of a Patron Saint or God/Goddess that I knew about. Different name, yes, but similar description and idea. Enough to make me feel like I knew what Archer was conveying as I read, unlike some books where the world is completely unlike anything I’ve ever known. I liked that it was grounded, however lightly, within reality.

Overall, this was a fast read, which had me laughing at times, cringing at others, and occasionally even hissing in anger or frustration. The only thing that truly kept me from giving this a five paw rating was that I wanted to learn more of Halja’s history and about Merderis. For someone who wanted to be one, I didn’t feel like I got to see all of the reasons why this would be such an appealing choice. Still, I definitely recommend this book to anyone who enjoys fantasy and paranormal novels. It isn’t often that I say this, but this is one book that I wouldn’t mind reading again at some point. And I am greatly looking forward to reading the next book in the series. =^.^=