I’d very much like to thank Roxanne of Bewitching Book Tours for allowing me to participate in this wonderful tour event, as well as Suzanne Johnson for creating an enjoyable series that I just can’t get enough of! If you’ve not yet had a chance to read Suzanne’s flash fiction piece, Playing with a Full Deck, please click HERE to give it a read over. And to see all of the other flash fiction pieces, as well as the other blogs participating in this event, please click HERE! =^.^=

The mer feud has been settled, but life in South Louisiana still has more twists and turns than the muddy Mississippi.

New Orleanians are under attack from a copycat killer mimicking the crimes of a 1918 serial murderer known as the Axeman of New Orleans. Thanks to a tip from the undead pirate Jean Lafitte, DJ Jaco knows the attacks aren’t random—an unknown necromancer has resurrected the original Axeman of New Orleans, and his ultimate target is a certain blonde wizard. Namely, DJ.

Combating an undead serial killer as troubles pile up around her isn’t easy. Jake Warin’s loup-garou nature is spiraling downward, enigmatic neighbor Quince Randolph is acting weirder than ever, the Elders are insisting on lessons in elven magic from the world’s most annoying wizard, and former partner Alex Warin just turned up on DJ’s to-do list. Not to mention big maneuvers are afoot in the halls of preternatural power.

Suddenly, moving to the Beyond as Jean Lafitte’s pirate wench could be DJ’s best option.

There are so many things that I could say about this book, I don’t even know where to begin or how much to divulge. As has been the case with the previous two books in the series, I simply just cannot get enough of Johnson’s writing! I know I’ve said this in my other reviews, but I just love how she blends modern New Orleans with that of the preternatural world she’s created for this series. And this time around I actually pulled up information online about some of the locations mentioned in the book. Yeah, when an author manages to motivate me to really look into the history of a place, it’s a sure fire bet that I’ve become a true fan. Shame that not all of Johnson’s version of the New Orleans isn’t real. I think I’d have a lot of fun if it was.

As far as the characters go, I still very much love DJ and Alex, and it was great to finally see them act on their feelings for each other. The idea of them as a couple is one that I’m really starting to want to see. Yes, it would be interesting to see DJ hook up with Jean or Jack, but the more that I’ve gotten to see Alex in the series, the more that I’m rooting for him. I also enjoyed the play between DJ and Rene and it was great to see him return in this book. Of all the character in the book that I didn’t care for, Rand seriously got on my nerves the entire story. He seriously doesn’t get that DJ doesn’t want him around, and his blatant disregards to her requests did nothing to endure him to me. Honestly, I think I was as frustrated with him as DJ was.

Action wise, this book was jammed packed from start to finish. It didn’t really feel as though there was a lot of down time between events. Just when it seemed as though DJ had a chance to breath and relax, something would come along which required her to take action. Though most of that action seemed to be running for her life and avoiding injury…something which she never seems to have much luck doing as this series progresses.

Overall, I think this was a great installment to the Sentinels of New Orleans series and I’m greatly looking forward to seeing what Johnson has next in store for everyone. =^.^=

Other books in the series:

Please click on the covers to learn more about each book 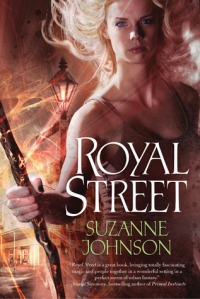 On Aug. 28, 2005, Suzanne Johnson loaded two dogs, a cat, a friend, and her mom into a car and fled New Orleans in the hours before Hurricane Katrina made landfall.

Four years later, she began weaving her experiences and love for her city into the Sentinels of New Orleans urban fantasy series, beginning with Royal Street (2012), continuing with River Road (2012), and now with Elysian Fields (August 2013).

She grew up in rural Alabama, halfway between the Bear Bryant Museum and Elvis’ birthplace, and lived in New Orleans for fifteen years—which means she has a highly refined sense of the absurd and an ingrained love of SEC football and fried gator on a stick.

She can be found online at her website or her daily blog, Preternatura. As Susannah Sandlin, she writes the best-selling Penton Vampire Legacy paranormal romance series and the recent standalone, Storm Force.

As part of the Elysian Fields Blog Tour, Suzanne is giving away 1 – iPad 2 (open internationally) and 5 – $20 gift cards to winners’ online retailer of choice (open internationally). To be entered, simply follow the Rafflecopter link below and fill out the form! Good luck to all who enter. =^.^=

*Review copy provided by Tor via Netgalley for an honest review.