← Guest Interview with Shannon Delany, Author of Weather Witch
New Cover Reveal of A Love by Any Measure by Killian McRae →

I’d like to thank YA Bound for allowing me to participate in this tour. For a full list of all the blogs involved, and for a chance to enter the giveaway associated with the event, please click on the banner above. Thank you. =^.^= 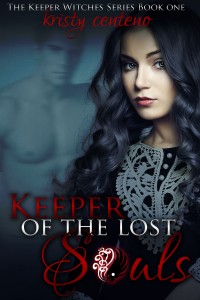 Bryn McCaskey is young, naïve, and can talk to ghosts…

Like her mother and grandmother, Bryn comes from a breed of witches called The Keepers of the Lost Souls. Their main purpose is to guard those spirits who are permanently or temporarily grounded in the world of the living. Handling supernatural creatures is something which comes naturally to Bryn, however, dealing with people is a whole different story.

As her 18th birthday approaches it’s time for her to take on her first assignment. Bryn is forced to confront her inability to communicate with others in an effort to save the one soul that can mean the difference between life and death for mankind.

A vendetta he has carried on even after death. As much as he hate’s them he must join forces with a keeper witch, in order to stop a century old threat. When fate brings them together, not only will they be forced to learn how to work as a team, but they will have to depend on each other to stop an evil witch carrying a six hundred year grudge!

I generally do not read YA, that as you know is Sara’s area of expertise, but I was pleasantly surprised by this book. It’s an enjoyable read and fans of YA will definitely like it.

Bryn is an interesting character in that she has a great many personal insecurities about herself and her magic, but the minute she needs to get to work she’s all business. It almost seemed like she became an entirely different person when she had to protect her charges. I’m not sure how much of that was instinctual, but I rather liked the no-nonsense side of her during these moments. But I also could relate to her own insecurities and that made her an easy character to connect with. Johnny on the other paw initially drove me crazy. His immediate dislike of Bryn and general haughty attitude ruffled my fur, but I eventually warmed up to him as the story progressed, and at the end liked him a lot. The relationship between both characters is slow to develop and rather sweet once established. The secondary characters are also a lot of fun, but I did want to claw at Marianne a number of times throughout the reading. She’s another character that took me a while to warm up too.

As far as the writing goes, it’s a fast read, though there were times where it felt like the story was dragging. I think most of this was a result of my own mind wandering rather than the book itself. The plot and character development were solid, and I liked that the story was told from both Bryn and Johnny’s points of view.

Overall, this is a promising start to what looks like a good series. I’ll definitely be looking into this author more in the future.

As a child, I used to lose myself in an imaginary world by the means of a good book. Now that I’m all grown up, I get to create my own fictional realms and make them come to life in ways that most readers might not expect.

I’ve always had a passion for writing but never had the opportunity do so until now. After trying out numerous options I realized that writing was what I loved the most so when I found myself with some free time on my hands, I decided to give it a shot. As it turned out, my very active imagination helped me achieve my goals of creating believable plots with some ordinary, and some not so ordinary characters that helped the stories move along in one way or another.

As I keep moving along in achieving my dreams of becoming a published author, I divide my time in between my four children and my very understanding husband.​