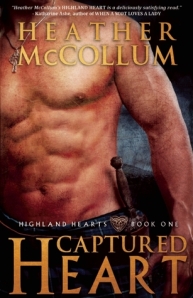 Fleeing with only her bow, horse, enormous pet wolf, and the cryptic clues hidden in her mother’s medicine journal, healer Meg Boswell gallops north towards freedom, running from the man who falsely accused her mother of witchcraft. Cursed with magical healing abilities, Meg knows that if she’s captured, she will die like her mother—atop a blazing witch’s pyre.

Winter winds rip across the Highlands, pressing Chief Caden Macbain forward in his desperate plan to save his clan. He’s not above using an innocent woman to bargain for peace if it keeps his clan from starving. But Meg isn’t who Caden thinks she is, and when she kills a man to save the clan, he must choose between duty and her life. For although he captured her to force a peace, Meg’s strength and courage have captured Caden’s heart.

Looking for a Historical Romance novel with a hint of the Paranormal in it? This book is for you!

Okay, I’ll admit it, any book that is set in the historic highlands of Scotland is definitely something I have to check out. So when I read the synopsis for this title, I became intrigued by the idea and figured I’d give it a read. And I’m glad that I did because this was a wonderful book. I immediately fell in love with the characters, became lost in the plot line, and enjoyed McCollum’s use of plant lore and Gaelic. There’s no doubt that had my health been better, I’d have read this book in one sitting, but as it was, it proved to be the purrrfect pick me up for when I was feeling down.

I loved each of the characters in this book, including the villain. Caden was the perfect blend of dedication, determination, loyalty, and strength. I had to admire his desire to achieve peace between his and the Munro clans. True, I didn’t approve of his lying to Meg, especially when it became clear that he had feelings for her, but I can’t really fault him either. Sometimes lying is necessary, but after a while, the truth does need to be told. Meg was a wonderful young woman who at several point in the story made me smirk in amusement. I loved the scene where she encouraged the clan elders to one-up each other in their storytelling. She’s a very bright, quick-witted, individual with a lot of hidden strengths. Honestly the only fault I had towards her was her inability to follow through with her plan to leave Caden after she finds out that he lied to her. She briefly entertains the idea and then melts into his arms shortly there after when he apologizes to her. In my opinion she had plenty of reason to pick up and go, but instead she accepts things and stays. That was a bit disappointing. ~sighs~ As far as the villain goes, Boswell is perfect. He’s a true power-hungry fanatic, with a smug, rather oily personality, and I just loved hating him.

What made this book stand out for me was McCollum’s periodic use of plant lore and Gaelic language. I’ve always been fascinated by the herbal properties behind various plants, so to read the medicinal uses described in Meg’s mothers’ journal was an eye-opening experience. And reading the Gaelic was a ton of fun! Especially since I had the opportunity to learn the language myself not too long ago. I was rather pleased to discover how much of it I remembered and I learned a few new words during my reading of this book. =^.^=

This is a great start to a promising new series. I highly recommend it to anyone who enjoys a fun Historical Romance!

Posted on September 29, 2012, in Book Reviews. Bookmark the permalink. Comments Off on Buggy’s Review of Captured Heart by Heather McCollum.