Willow’s Review of Blood of Anteros by Georgia Cates

I’d like to thank A Tale of Many Reviews for letting me participate in this tour event! For a full list of all the blogs participating and for an opportunity to enter the giveaway associated with this tour, please visit HERE! 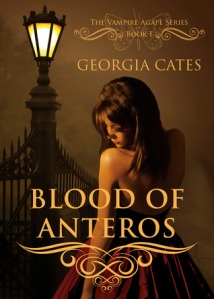 “I was tantalized by the mystery of her. The leech inside me came out to find prey, but found none in this enigmatic girl. The close proximity of her essence didn’t entice the monster within, so what did that make her? I had more questions than answers, but one thing was unmistakable; although she released me from her embrace, her hold on me remained.”

Cruel circumstances turned Curry Brennan into the wretched monster he hates and refuses to accept, but when an expected turn of events releases him from the bond of his obsessive maker, he returns to the home he knew 161 years earlier and finds the return of happiness and joy in something he didn’t know existed. Puzzled by his growing attraction to Chansey Leclaire, a human, he is unable to resist the captivating relationship that threatens to reveal his existence as a vampire. He eventually discovers the reason he was destined to find what he didn’t know he searched for and is faced with the cruel realization that the living and the immortal undead will always be separated by one thing. Eternity.

I’m going to be doing this review a bit different, so bear with me please. Rather than try to struggle putting words into coherent sentences and paragraphs, I’m going to organize things into strengths and weaknesses. Honestly, this was a “meh” book for me. While I liked parts of it, there were also parts which kept me from enjoying the novel. So here we go…

I absolutely loved the mythology that Cates uses in this story! Greek mythology has always been something that I found fascinating, so when it showed up in the story, my attention was instantly caught. Cates’ take on vampire lore was rather unique and the way she uses the mythology to help enhance her story set this book apart from other vampire books that I have read. I only wish that she had gone into more detail because it was an intriguing concept.

The characters were engaging and likeable. While there were some elements to each of them that got a bit under my fur, Curry serious use of contemporary words and phrases being the biggest one (he’s suppose to be close to 150 years old and old-fashioned, yet he sounds like a college frat boy at times), I still found myself caring about them. Curry’s conflict/hate over being a vampire made it easy to sympathize with him. It also helped set the tone for his choices regarding Chansey later on in the story. Chansey is herself an enjoyable character. I loved her no-nonsense, spitfire attitude. She also had a few good one liners.

This was a fast read. Once I actually picked it up to start reading, I could have easily finished it in a day.

The romance was subtle and sweet. It wasn’t in your face, shirt ripping, lust as I’ve come to expect in my favorite vampire stories. Instead this was more like a courtship. It was actually a nice change from what I’m use to reading.

The cover is gorgeous. I know in the grand scheme of things this doesn’t mean much, but I do have to admit to loving the cover. =^.^=

There is little to no action whatsoever! I kept waiting for something climatic to happen and it never came. The only fights that actually happened were between Curry and the guys who were interested in Chansey. In this sense, the book was dull. It really is all about the connection between Curry and Chansey and Curry’s acceptance of it. If you are looking for action, be prepared for disappointment.

I was seriously disappointed in the ending. There’s no resolution to the conflict. In fact, Cates just leaves you hanging there wondering what is going to happen next. It’s definitely designed to get to you to pick up the second book in order to find out how things are resolved.

I couldn’t really connect with Cates’ writing style. A lot of the time I felt like the story was being told to me rather than written in a way that would allow me to experience it. It felt stiff and it definitely dimmed my enjoyment of it.

So overall, there are elements that I feel a reader will like within this story, but as an introduction to a new series, this one fell short for me. I didn’t dislike, but I wasn’t enamored with it either. It was just…meh.

I would like to add that I am reading book two in the series, Blood Jewel, so it will be interesting to see how my views change, if any, once I’m done. That review will go up August 21, 2012.

Posted on August 18, 2012, in Book Reviews. Bookmark the permalink. Comments Off on Willow’s Review of Blood of Anteros by Georgia Cates.