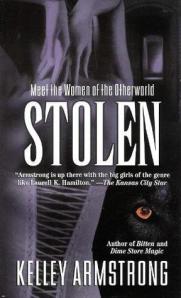 It was in Bitten, Kelley Armstrong’s debut novel, that thirty-year-old Elena Michaels came to terms with her feral appetites and claimed the proud identity of a beautiful, successful woman and the only living female werewolf.

In Stolen, on a mission for her own elite pack, she is lured into the net of ruthless Internet billionaire Tyrone Winsloe, who has funded a bogus scientific investigation of the “other races” and their supernatural powers. Kidnapped and studied in his underground lab deep in the Maine woods, these paranormals – witches, vampires, shamans, werewolves – are then released and hunted to the death in a real-world video game. But when Winsloe captures Elena, he finally meets his match.

Turns out that I’ve actually not read this book before. I was surprised as I thought that I’d read at least the first four in the series, but I guess I was wrong. So I got to discover this book for the first time and I must say that I enjoyed it quit a bit. =^.^=

As with the first book, I found myself loving Elena and her sarcastic wit! She definitely appeared to be a stronger person in this one. There wasn’t the rebelling against the pack or dominance games this time around which I think really made her standout more. Dare I say that I think I like her a lot more in this book than I did in the first? I also have to hand it to Armstrong for creating the perfect villain in Winsloe. This guy is all sorts of crazy! He’s definitely not the type of guy you want to run across. ~shivers~ Another surprise character whom I couldn’t get enough of was Xavier. At first I wasn’t sure I’d like him, but by the end he turned out to be a truly intriguing individual.

This book went in a different direction than I would have expected. Instead of continuing off roughly where the first book left off, Stolen occurs about a year later and rather than just dealing with pack issues, Elena finds herself dealing with other paranormals instead. It’s a nice mix in my opinion. Sets things up nicely for the third book in the series. And I found Armstrong’s take on witches, vampires, shamans, etc., to be interesting.

So when all is said and done, I have to say that the series is definitely holding my interest and I’m looking forward to reading the rest of the books in the series. I’m also looking forward to watching it evolve and seeing if Elena appears in some of the future books.